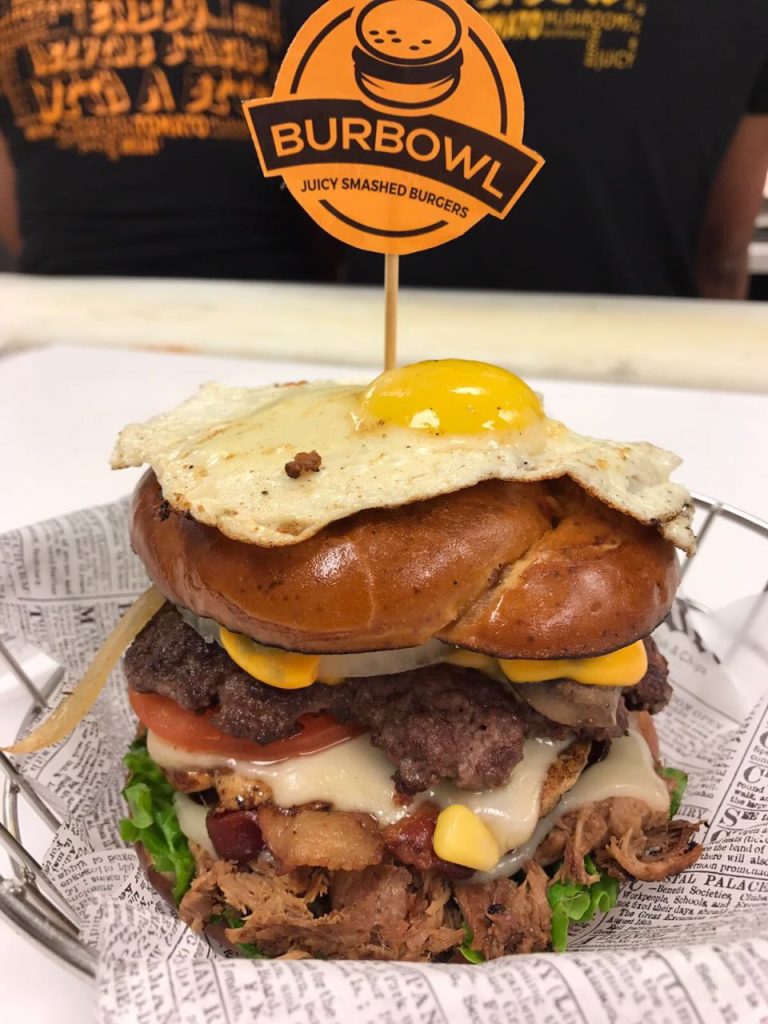 Attention, foodies! Juicy, smashed burgers and burger bowls have made it to Coral Gables! BurBowl has opened their second location at 244 Miracle Mile joining the ranks of some of the best food South Florida has to offer. To celebrate the opening, BurBowl collaborated with the self-proclaimed Bacon King, Richard Shutes, local artist and founder of @BaconARTS, to create the YOLO Burger. This triple decker monster of a burger consists of a 100% Angus Beef patty, all-natural chicken, pulled pork (pernil) and bacon along with 5 different types of cheese, guacamole, lettuce, tomato, grilled onions, and mushrooms between a pretzel bun and topped with a sunny side egg. The YOLO Burger by @BaconARTS is only available at BurBowl’s two locations (the original location is at 117 S.E. 3rd Avenue in Downtown Miami, Florida) this weekend on March 18th and 19th.

What exactly is a BurBowl, you ask? A BurBowl is the breadless concept of everything you’d get with a burger. Start with your protein (100% Angus beef, all natural chicken, pulled pork (pernil) or veggies), melt it with your choice of cheese (cheddar, American, white American, mozzarella or Swiss), top with as many toppings as you’d like at no additional charge (except for guacamole which is only 99 cents) and finish it off with one or more of your choices of sauces (mayo, ketchup and mustard) including BurBowl’s own in-house made sauces: cilantro, pink, pineapple, BBQ, garlic chipotle and juicy secret sauce. But don’t stop there. BurBowl also serves up regular burgers, hot dogs, salads, fries (crispy, cheesy and loaded), sweet potato fries, onion rings and yuquitas.

It’s also important to know that for every burger and bowl sold in their restaurants, BurBowl will make a donation to foundations dedicated to raise awareness and end world hunger. So stop by and give them a try.